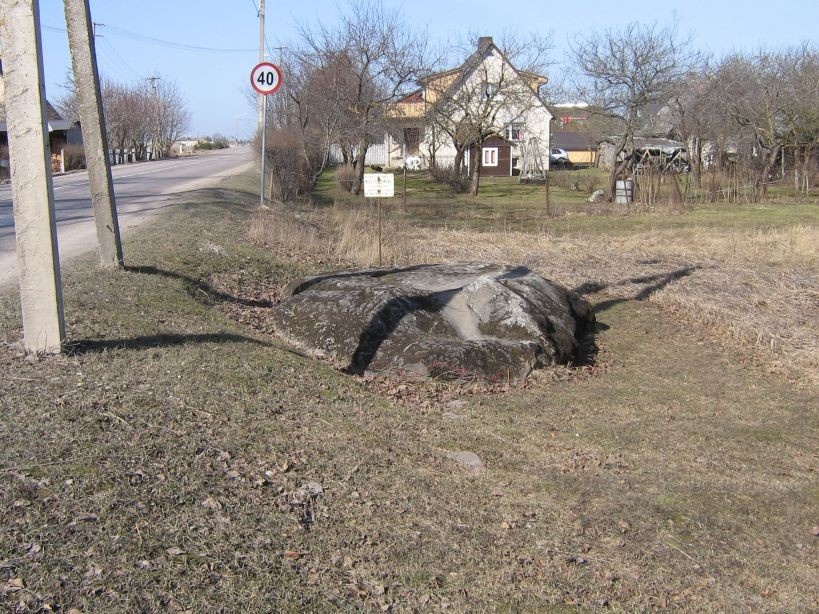 navigate_before navigate_next
Approximate address: Järve tee 9, Assaku, 75301 Harju maakond, Estonia
Assaku Nõiakivi (the Witch’s Stone) is a cup-marked stone with the largest known amount of dimples – altogether there are 405 hollows on its top and side surfaces. The diameter of the depressions is usually 3–10 cm and the depth 0,5–5 cm. The bottom of the dimples is bowl-shaped and convex. The making of depressions on rocks and stones is the oldest known ritual-related phenomenon and has been practiced all around the world. In Scandinavia, the hollowing of the stones started during Neolithic times, but mostly spread during the Bronze Age together with rock art. In Estonia, there are ca 1750 known cup-marked stones; most of them are located in Northern Estonia. The Estonian cup-marked stones have also been considered as a Bronze Age phenomenon as they are close to stone graves dating to the same era. Unfortunately, the time of making the depressions cannot be determined and the exact time of marking the stones remains unknown. The hollows are associated with some form of fertility cult as the stones are located close to arable land. Assaku Nõiakivi has signs of more recent modification, too – a cross-shaped depression has been made which suggests that the boulder was used to mark land borders. The cross-shaped impression has started to fade as the sloped stone has also been used for sliding.Altogether it can be said that Assaku Nõiakivi is extremely multifunctional. The stone is under national protection and its registry number is 18734.